There has been a slew of complaints from users about their Apple iPhone not getting SMS texts. Such complaints have been doing rounds for quite a while now and hence deserve attention.

And no, this issue doesn’t have anything to do with the infamous missing notifications bug which we highlighted here previously. Rather, in this, SMS texts fail to show up entirely. Even in the Apple Messages app. I’m also having the same problem on a brand new iPhone 12 pro. It seems to only occur in sms threads (where at least one contact is not an iPhone user) and certain messages are never received
Source

Moreover, the issue is much more apparent in chat groups where there are one or more Android users. Simply put, certain messages are never received making it pretty much impossible to facilitate any sort of conversation.

Furthermore, most users have already tried common fixes like resetting network settings multiple times, toggling MMS and group messaging on and off, and logging out and back into iCloud.

That said, if you happen to have missed out on any of the aforementioned possible fixes, then be sure to try them out first.

And while Apple support has continually blamed the issue being on the carrier’s end with Apple having nothing to do with the matter, it is worth noting that the problem is being faced by the users of multiple US carriers like Verizon, T-Mobile, AT&T, and possibly more.

This has led many to believe that the issue is actually from Apple’s side.

But again, since many of the users have observed that they only face the issue when the other party is making use of an Android phone, it wasn’t that hard to establish a pattern and isolate a possible fix.

What to do when your iPhone is not getting texts

It appears that the problem is not just from your end. Rather, there seemingly is a compatibility issue between Androids and iPhones pertaining to SMS texting, at least for some users. 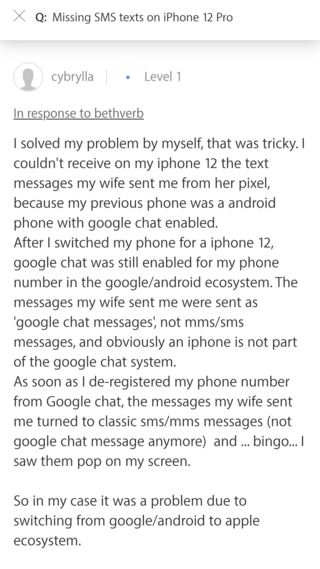 The main culprit seems to be Rich Communication Services or RCS in short. The technology is an attempt by Google to counter Apple iMessage and aims to add several features like read receipts, typing indicators, group messaging, and more to regular SMS.

That said, if you want to be able to continue communicating seamlessly with an Android user, the RCS feature will have to be disabled at their end in order to fix the issue.

To do this on an Android device making use of the Google Messages app, the following set of steps will have to be followed:

However, if the user is making use of Samsung Messages, then there is no universal toggle to disable the entirety of RCS. Instead, the following set of steps can be tried:

The above should do the job for you. If it for some reason fails to do so, then be sure to check out this official Apple support article for further help.

With that being said, if interested, be sure to check out our dedicated iOS 14 bug tracker as well as our iPhone 12 issue tracker for further coverage on matters like these.

PiunikaWeb started purely as an investigative tech journalism website with a main focus on ‘breaking’ or ‘exclusive’ news. In no time, our stories got picked up by the likes of Forbes, Fox News, Gizmodo, TechCrunch, Engadget, The Verge, MacRumors, and many others. Want to know more about us? Head here.